Linking the Dendrochronology of Northern Europe and the Mediterranean

Researchers at the Laboratory of Tree-Ring Research are working to link the long chronologies of NW Europe with those of the Near East and Mediterranean. The aim is to construct a continuous, absolutely dated tree-ring sequence spanning more than 10,000 years, to be a resource for chronology, dating and provenance in the cradle of so many civilizations. The map shows the spread of existing chronologies from the north in yellow and to the south in red. The line represents the linkage area to be targeted by this work. Tomasz Wazny has already established linkages across the Carpathian mountains. Such linkages give a clear indication that modern and historic tree-ring collections from SE Europe will allow us to connect NW Europe dendrochronologically with the Near East and Mediterranean. 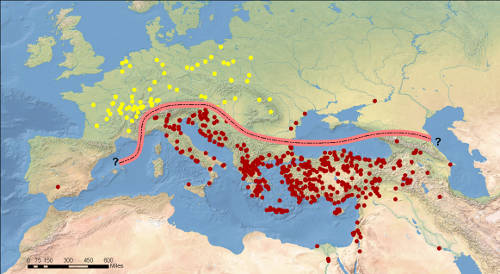 Two sites proving to be of particular importance are the remarkable excavations at Yenikapı in Istanbul and the Orasje region on the Croatian / Bosnian border where giant water-logged oak trees are being dredged from river-beds.

At Yenikapı approaching 4000 wood samples from docks and other structures have been retrieved from the ancient harbor and built into chronologies spanning the first millennium AD.

Material from Orasje has been put together to form several floating chronologies which are now approximately placed by radiocarbon analysis at around 1,600 BP, 3650-3,851 BP, and 7000 BP, but there are many more samples still to be collected and good reason to expect older material still, as oaks are known to have existed in the S. Balkans for most of the glacial period.

Further tree-ring studies of this material should lead to the development of a multi-millennia-long oak chronology, with the potential to be the oldest early Holocene oak chronology in Europe and to provide a new resource for those interested in the chronology, paleoclimatic reconstruction and study of human / environmental impacts in the wider Aegean region and beyond.