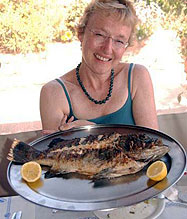 Mary C. Stiner is a Professor in the Department of Anthropology and Curator of Zooarchaeology at the Arizona State Museum of the University of Arizona (P.O. Box 210030, Tucson, Arizona 86731-0030, U.S.A [mstiner@email.arizona.edu]). She earned B.A. and B.F.A. degrees in Anthropology and Fine Arts, respectively, in 1980 from the University of Delaware. She received her Ph.D. in Anthropology from the University of New Mexico in 1990. Her book, "Honor among Thieves" (1994, Princeton University Press), won the first Society of American Archaeology book prize awarded in 1996. She is an Associate Editor for Journal of Anthropological Research, Journal of Human Evolution, and SAA Press. She has done archaeological fieldwork at Paleolithic sites in Italy, Israel, Greece, Turkey, Portugal, and France, and sites of diverse ages in the United States. Current projects include zooarchaeological research on pan-Mediterranean trends in Paleolithic diet, predator-prey dynamics & human ecology.