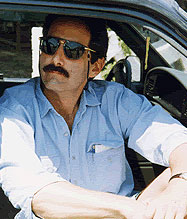 Dr. Kuhn is Professor in the School of Anthropology and Director of CMATE. He has been working on Paleolithic archaeological sites and collections from across the northern and eastern Mediterranean for more than 25 years. Field and museum research has taken him to Italy, Greece, Serbia and Montenegro, Israel, Syria, and Turkey. He is currently involved in collaborative archaeological fieldwork and laboratory projects investigating Paleolithic sites and artifact assemblages in Turkey, Serbia, and Tucson.

Dr. Kuhn’s research focuses on the ways environmental and social conditions influenced the biological and cultural evolution of humans and human ancestors. He uses data from the study of stone artifacts as one source of information about the ways hominins interacted with their environments and with each other. Satisfactory answers to these sorts of “big” questions cannot come from a single kind of evidence, however, so like many of his CMATE colleagues Dr. Kuhn emphasizes interdisciplinary collaborative research integrating the work of scientists from diverse fields.

Kuhn, S. 2013 Questions of complexity and scale in explanations for cultural transitions in the Pleistocene: a case study from the early Upper Paleolithic. Journal of Archaeological Method and Theory 20 (2) 194-211.