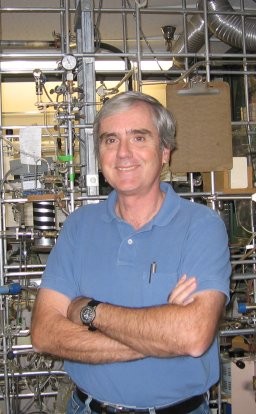 The investigation of water-use efficiency of trees has been further pursued by Leavitt through completion of an unsupported project by re-sampling a 14-site Southwestern pinyon between 1999 and 2003. This network had been developed in the mid-1980s with analysis of pentads, and stable-carbon isotope analysis has been completed to bring the chronologies up to 1999 with single-year analysis from 1985-99. These data are additionally being used to explore relationships with environmental moisture. Water-use efficiency is also being probed through a collaborative study of Aleppo pine tree rings in Israel with Dr. Daniel Yakir.

Much of Leavitt’s efforts over the past 6 years have involved ongoing investigation of wood from ancient buried forests from around the Great Lakes area. The focus of the study is the Younger Dryas period, and Leavitt and Dr. Irina Panyushkina have collaborated to assemble a massive collection of ancient wood from the area spanning the period from about 4,000 to 15,000 years ago, representing ca. 15 different sites. Some of the wood had been previously collected by other researchers, but a large number of new pieces were collected in this effort. Standard ring-width techniques have been applied to develop floating chronologies, and stable isotopes have been used to further infer past environmental conditions. This study has involved collaborations with more than a dozen researchers, most of whom are located in the Midwest. The centerpiece of the project has been full tree-ring characterization of a Younger Dryas-age black spruce site from Indiana.

By long-standing collaboration with Dr. Ron Follett of USDA, radiocarbon dating and stable-carbon analysis has been applied to depth profiles of Great Plains soils sampled in undisturbed remnants of the original grasslands. The results have been used to make maps inferring distribution of C~3~-C~4~ grasses over the past 10,000+ years.

Collaboration with Dr. Iain Robertson (University of Wales-Swansea) has helped Dr. Zewdu Eshetu to establish a dendrochronology lab in Addis Ababa and to initiate projects on junipers from the Ethiopian Highlands. The hope is that tree-ring work in Ethiopia will better inform understanding and decisions about water resources. Collaboration with Dr. Chris Still (UC-Santa Barbara) has resulted in tree-ring chronologies and isotopic analysis of Bishop pine from Santa Cruz Island and Torrey pine from Santa Rosa Island off the coast of Southern California. Here the question of contribution of fog during the normally arid summers to tree growth is being examined.